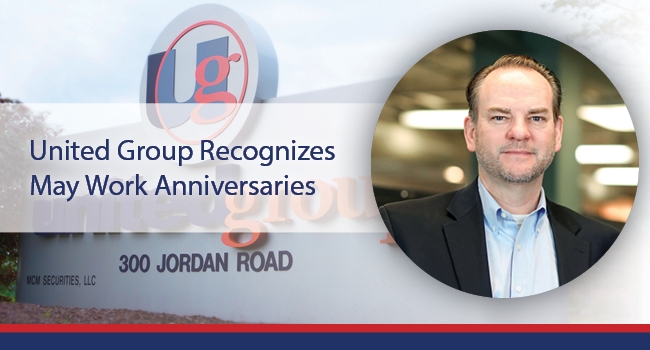 As the month of May comes to a close, United Group is thrilled to recognize Bill Flanigan, who recently celebrated his fifth year with the company. Bill currently serves as United Group’s Development Executive and plays a leading role in several current developments including City Station North and an independent senior living community in Ashland, MA. His previous work includes Deerfield Place and City Station East.

Bill is a graduate of Dartmouth College, where he played collegiate hockey. Mr. Ivy League! He enjoys working on home carpentry projects, as well as spending time with his grandchildren, who refer to him as “Flanpa.”

I recall being very impressed with the on-boarding experience presented by Joan Cavanaugh. I felt welcomed and appreciated until I met the legendary Graham Thompson and realized that he would be my office neighbor. I was also shocked that United Group didn’t participate in a company softball league, so I joined a men’s hockey league with Michael Uccellini, and I quickly realized that he was much more demanding on the ice.

I began my career at United Group as a project manager and oversaw commercial “fit ups” at City Station East. In early 2015, I transitioned into the Development Department and started working on Deerfield Place, as well as the final stages of City Station East’s development before construction was set to begin.

I always stop by Graham Thompson’s office to make sure he is still upright and vertical. I then begin my routine of consuming approximately two gallons of coffee, before I wage a war on the latest piece of office technology. The large-scale printer has been my arch nemesis.

4.) What do you love most about United Group?

I appreciate the very rare occasion seeing Tommy Uccellini in the office. I’ll always enjoy Michael Uccellini’s unique and large laugh. It’s always nice accomplishing a good deed during the day, like when I help a person in the elevator when I hear it get stuck. I also really appreciate Nancy OMalley’s guidance and support.

5.) What advice do you want to give yourself now, after working for the United Group during for past 5 years?

Park in the reserved parking spots early so I don’t have to walk too far when it rains. I should also log into the company’s ADP System more than once every two years. In all seriousness, time flies by, and I appreciate the friends I work with, and the work that we accomplish.