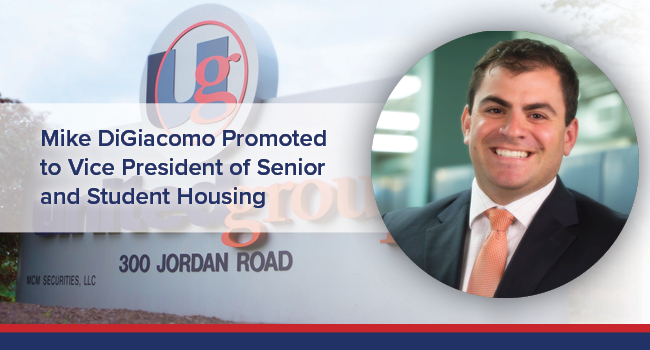 United Group is thrilled to announce that Mike DiGiacomo has been promoted to Vice President of Senior and Student Housing.

His new role will include overseeing corporate operations and asset management of United Group’s senior portfolio and student portfolio in addition to direct supervision of lease-up initiatives at independent senior living communities in Florida and Colorado.

Prior to his career with United Group, he was a Property Manager for Gross and Cohen LLC, where he directed site operations for off-campus student housing properties in New York and Kentucky.

“I’m honored to be promoted to the vice president level, and to have had the opportunity to grow within the organization. Since day one, I’ve always felt a part of the ‘United Group family’ and I look forward to helping the company continue to succeed,” said DiGiacomo.

United Group is very proud of Mike’s passion for the real estate industry, and the leadership skills he’s developed throughout his career. United Group looks forward to watching him excel in his new position. Congratulations, Mike!