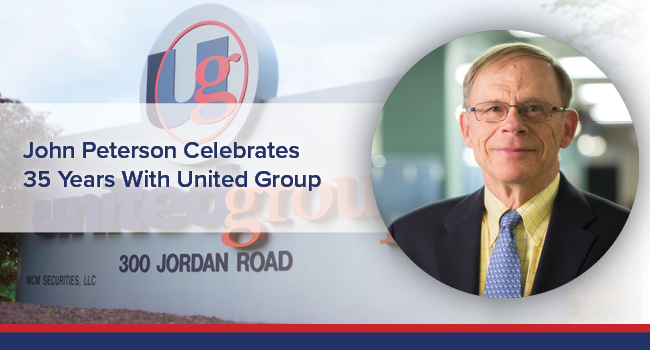 United Group is proud to recognize John Peterson for celebrating his thirty-fifth work anniversary with the company. John, United Group’s vice president began his career on October 22, 1984. Yes, 1984!! Think about what a different time and era 1984 was. In 1984 gasoline cost $1.13. A wall divided the City of Berlin, Germany. Ronald Reagan steamrolled Walter Mondale. “When Doves Cry” by Prince was the #1 song of the year. Graham Thompson was a young and wild Canadian back then. United Group was only twelve years old.

So much has happened in the corporate and cultural chasm since 1984, and John Peterson has been here through it all.

In his illustrious thirty-five-year career, John has played an essential and dynamic role in the company’s finance department arranging debt and overseeing equity raises. His expertise and hard work have been a major contribution to United Groups success over the decades, and he brings a wealth of knowledge to United Group’s next generation of employees.

His colleagues in the finance department celebrated the milestone work anniversary with lunch in North Greenbush, NY. The United Group Team created a video congratulating and thanking him for this service. Click here to watch the video!

Thirty-five years is one heck of a milestone! Congratulations, John! We appreciate your dedication and hard work throughout the years and being the company’s “historian.” Thank you for everything that you do.

I remember talking with a few of my new colleagues at the end of the day to figure out my title to put on a business card.

The role now is more administrative on the debt-side while 35 years ago it was more direct, hands-on arranging debt. Now, I’m directly involved in overseeing equity raises, back then, that was handled by others.

Learning to use a computer. Up until coming to UGOC, I had never touched one.

It has to be the people; they are a great bunch who are always willing to pitch in to get the job done.

6.) What advice do you want to give yourself now, after working for the United Group during for past 35 years?

Transitions are never over until they are over.